How to do lean startup in an enterprise?

How to do lean startup in an enterprise?

While the answer to the question ‘how to do lean startup in an enterprise’ is quite complex, there are some patterns. The below image is from ‘the startup way’, written by Eric Ries. He identifies that main patterns that need to change from ‘traditional management’ to ‘entrepreneurial management’. Usually, enterprises will need to go through a transformation with a structured program to create corporate startups. The building blocks of such transformation can be derived from the below main patterns.

It seems common sense to see ‘startups’ as independent entities, disrupting traditional businesses and bringing innovation. But the past few years, enterprises have started adopting ‘the startup way’. While an enterprise can never BE a startup, they can adopt the principles that underlie startups. With this, they can create startups within their larger organization. Either as atomic units inside the existing structure or (eventually) as separate entities outside that structure. 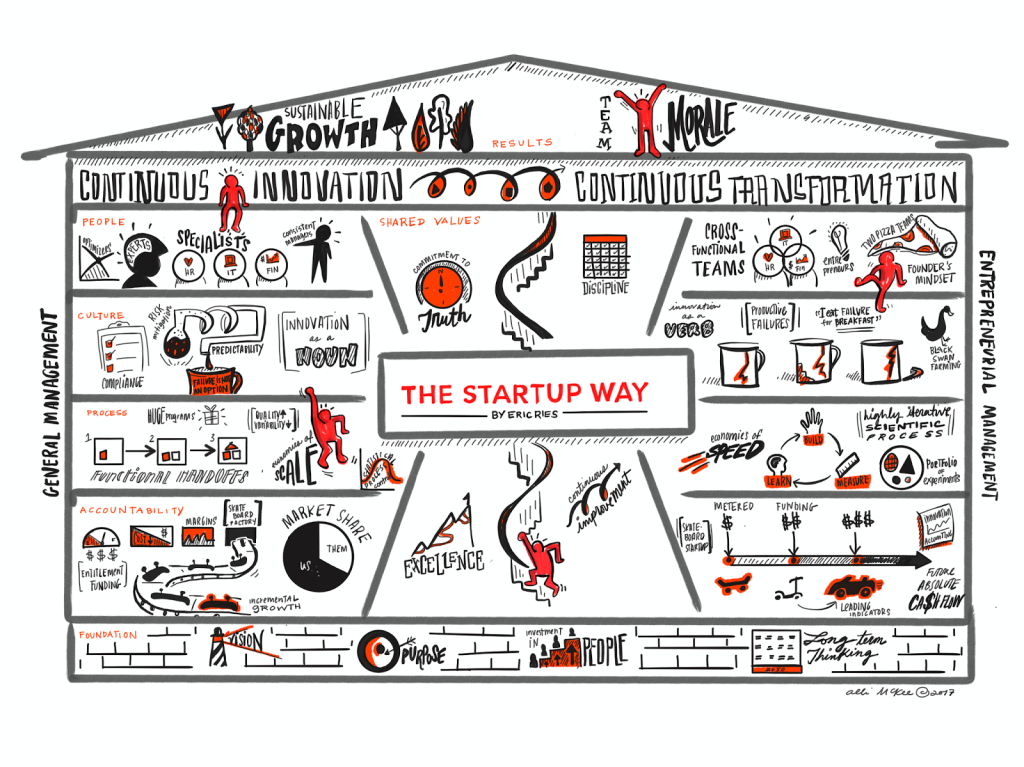 1. From ‘specialists’ to ‘cross functional teams’

Most organizations have teams of specialists, typically organized in departments. People see themselves as belonging to one department or function. Usually they are hired for a role in that department and restrict themselves to the responsibilities laid out in their job description. Startups function differently; in general, they need generalists in the early stages. People who can ‘get things done’ and don’t look at what they are hired to do, but what needs to be done. Typically, the best way to organize this in a traditional organization is in ‘cross functional teams’. While people can still work on their main function, the team can tackle everything that needs doing. A startup team can have a CEO, CTO, a CMO and then people who support the rest (finance, sales, development, design, etc).

2. From ‘a culture of compliance and predictability to a culture of speed and embracing failure

Traditional management is based on compliance and predicting the future. Managers want to control what is happening. They want to control finance, people, products, so their mutli-year plans work out as described in their original business case. For a predictable and mature business this may still work (although a startup might suddenly pass by to disrupt that predictability). For a startup, this doesn’t work. A startup is trying to find out what business is must go into. It is trying to find out who its customers are and what business model can work. Nothing in a startup is predictable until it has ‘figured out’ what product-market combination works.

To enable intrapreneurs to innovate, corporates must let go of the need to control things. Where traditionally, big business cases and long term funding were the norm, we must let go. Startup funding works in a staged approach. For the initial ‘exploration’ period, a startup gets some business angels to provide them with a small runway. Typically 6-12 months with enough money for the entrepreneurs to sustain themselves, hire some initial people and fund their experiments. They must report progress to their investors. This progress is based on learning, on initial feedback and Minimum Viable products which they used to learn what their users really want. Once they have proven enough and achieved some positive outcomes, they can go to some professional investors to get their series A funding. To get this funding, they must get positive feedback from their original investors. The new investors will want to hear stories around learning, initial traction, proven business models and other early stage results. Again, they will get sufficient funding to run through the next cycle of making their initial business work out and if they show outcomes, they can get series B, etc.

Now a corporate can adopt a similar method of funding. Instead of VC’s, they can have an investment board representing leaders from various levels and functions to decide on the funding. The internal startup teams must show progress and results to secure the next round of funding. They don’t get the funding because they have friends, a long track record or the best business case; they get funding because they show results. This is what Eric Ries calls ‘metered funding’.

In traditional project management, we have ‘silos’ or ‘functional departments’ that work on a project at different stages of its lifecycle. Once a group of people has finished working on a specific part, they hand it over to the next group. If we look at digital product development, a group of analysts starts the work and develops requirements. They then hand it off to the designers who start creating pages and screens. Once those are confirmed, they hand over to the programmers who in turn hand over to testers once they created the required software.

This is what the software industry calls ‘waterfall’. Methods like Prince2 and ITIL all believe in ‘predictability’. While in reality, projects nowadays are much less predictable than a decade ago. Modern organizations adopt ‘build-measure-learn cycle’. Instead of making requirements upfront, they run ‘experiments’ or ‘cycles’. They define what can be developed in a cycle of 2 or more weeks. They build and launch it to their users. That gives them feedback (data and quantitative inputs), from which they learn what really needs to be built for the users.

The paradigm shift here is big. In traditional project management, we assume we can define everything upfront. We assume projects are like building a house: the architect designs the whole structure, it’s signed off and then the construction teams sequentially finish the house. Built-to-spec. In the lean startup way of launching new products, we assume that we’re moving in uncharted territory. We are developing something new and hence we don’t yet know what the users or market really needs. Therefore, we make hypotheses, based on the assumptions (what we think the users need). We validate those hypotheses before we really build anything. Only when we validate, we build the ‘real thing’. This ensures we build the right thing and we avoid all the waist associated with building the wrong thing.

This paradigm shift requires leadership. We need to create a culture of experimentation. A culture in which people are okay with failure (because if we falsify our hypotheses, we’re basically failing). In which we prefer to learn that we should NOT build something or should KILL a certain project, before we invest our money and time into it.

4. From accountability and entitlement funding to metered funding ‘startup style’

In enterprises, we have strict procedures for funding projects. We require people to write business cases, which are then sent to some line manager and if he agrees, it will be sent to the finance department. We usually spend months to get a business case approved. Once it’s approved, the person applying for the budget is ‘entitled’ to the funding. That entitlement might be for 6 or 12 months. Once a project is funded, it might get funded again at later stages, because the person applying has the right political connections or because the leader sponsoring the project does not want to kill it. That’s what we call ‘entitlement funding’.

In startups, funding happens in stages. A startup initially gets some ‘angel investors’. Those are usually people using their personal funds to support a startup idea. There is personal trust between the investor and the startup founders. The founders get for example 200.000 USD and with that money they must show results to the (future) investors. Upfront, we define what we expect in terms of outcomes. In the early stages of a startup, ‘outcomes’ mean ‘learning’ (what users need, whether the product is viable, what the pain points are in the market, etc). After learning, the outcomes become ‘user acquisition’ or ‘members’ or something similar. The team has learned enough to launch some initial version of the product and is now trying to get users to adopt the new product or service. In later stages, the outcomes are turnover or profit.

Now it’s not easy to change this type of funding in a large enterprise. Depending on the industry, there are (government) regulations. There are procedures in place to ensure that the people in the company invest the companies money (which is the shareholders money) wisely. Essentially, all the regulations are made to ensure accountability with the people making investment decisions. To protect shareholders (which are private people or institutions in publicly traded companies) from their money vanishing in the wrong projects or pockets. Becoming a modern company means that we need to adjust the attitude of the company towards risk. To change the way we look at investment and budgeting.

‘In Silicon Valley, the money you raise is yours. You can spend it on what you like with minimal oversight (especially in the early stages). But Lord help you if you try to raise more money and you haven’t made any progress. Seed-stage funding provides an excellent balance between risk mitigation and freedom to innovate. The structure of the startup limits the total liability of the team to the total money raised. And it strictly limits the amount of time and energy the team has to invest in acquiring and defending its budget. But at the same time, it creates a strong incentive to keep investors informed when there’s something newsworthy to share so that they will want to continue investing and provide a positive reference to the next set of investors.’

Want to know more? Talk to us